A while back we did a lot of work on our teen boy’s bedroom closet which included widening the doorway to allow for a large, built-in storage unit. His room isn’t all that large or “roomy”, so maximizing his closet to allow for both drawer and hanging storage was extremely important and has proven to be a great way to give him more space for reading, working on projects, having sleepovers, and doing his homework.

We knew there were so many benefits to widening the doorway to his closet, but then the problem solving began in terms of how to cover it all back up. 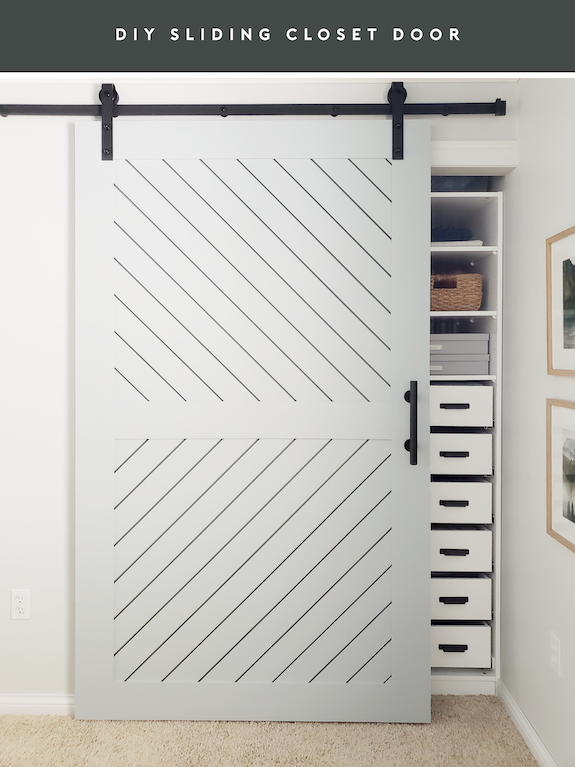 There was a bit of planning and troubleshooting and decision making that went on with this project. Here are a few of the things we had to work through:

To keep the trim or not? That was the question. I decided that if we kept the trim around the door, that it ultimately should be completely covered by the door when it was pulled closed. But that would also increase the size of the door by about 4-5 inches in width, and the door was already measuring pretty large. The alternative was to remove the trim, but that would require more drywall work and some fussy refinishing.

Before making a quick decision, we thought we would install the rail to get a good idea of how far away from the wall the door would hang, and if the trim would interfere with it at all. Bryan easily had the rail installed in less than an hour and didn’t even call me in to help (using the included installation instructions). Yay Bryan! Except I was instantly confused by the placement of the rail. He used the large bolts that came with the rail kit and installed them directly into the wall studs. Which made complete sense. But, this meant that the rail didn’t go all the way to the corner of the room (it was just an inch or two short). If you want to be extremely specific about the rail placement, then you actually need to install a ledger board into the studs first, and then the rail can be installed anywhere into the ledger. Bryan knew I didn’t want to use a ledger board if I could help it, so he just assumed going into the studs was the answer. But then I wasn’t sure if I loved that the hardware didn’t land exactly into the corner. And that led to another decision to make.

We now knew that the door would hang out enough to clear the trim, so the trim was going to stay. But before making any more decisions regarding the rail placement/ledger board, I wanted to construct the door and see it on the rail. The advantage of a ledger board is that it gives you the flexibility to install the rail hardware wherever you would like. It also allows the door to hang even further away from the wall/trim. The disadvantage is that it is another distracting element that adds to the entire setup (although painting the board the color of the wall would minimize that).

When coming up with the design for the door, I had a couple of inspiration pictures saved that I continuously referenced. This one and this one were my top two favorites. They both had a diagonal design that was trimmed out in a classic style. My son also really liked the design and gave me the thumbs up. With the hardware installed, we now knew how the rail system worked, where we wanted the wheel hardware to attach to the door, and the maximum thickness the door should be.

Quick Tip: We taped a couple of pieces of paper together that were scaled to the exact width of the door that we had planned to build. Then we drew the top trim boards based on our measurements and “installed” the paper on the rail with the hardware. This was a GREAT way to visualize how the door would cover the closet door casing and also allowed us to confirm that the boards we were planning on using to trim the face of the door would line up nicely with the hanging hardware. I like to visualize things before completely committing whenever possible.

Finally, my last but largest concern that I had was that the large door would be too overwhelming due to the smaller size of his room. The door was going to be just over 4′ x 7′ and I just didn’t know of any other options in terms of closing off that wonderful opening we created. I told myself that sometimes larger things work best in small rooms to create more visual interest and to help balance some of the smaller accessories and knick-knacks. I also figured I could paint the door a similar color to the walls so that the pattern could be the focus, and the color would more or less fade away.

Now that we had worked through all of those points, it was finally time to start building that dang door! 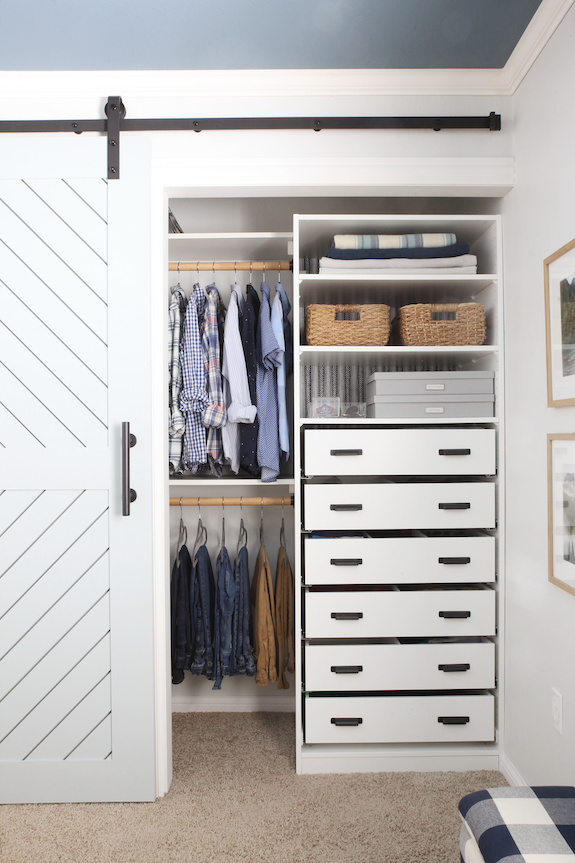 Because our opening plus trim was over four feet, we talked through a few ways to achieve that width with as little wood as possible (to keep the door from getting too heavy). We began with a 4′ x 8′ piece of 1/2″ thick MDF because the actual dimensions are 49″ x 97″. If we were to trim out the edges with 1″ x 2″ boards, then we would be exactly where we needed to be. With that in mind, we thought we would construct something similar to our son’s DIY headboard project. 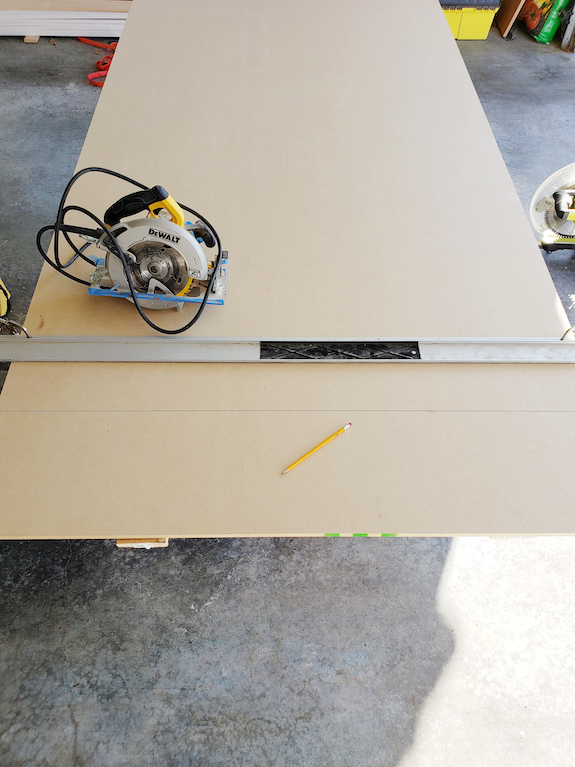 The rail was already installed so we had the exact measurements we needed so we began by cutting the height of the door accordingly.

Then I got to painting. I decided it would be easier to paint the back of the board, and the edges of the top boards, before assembly. I am telling you, doing this first was a major sanity saver later on! It made putting that final coat of paint on the finished door SO MUCH EASIER not having to get my brush down inside of every last groove. 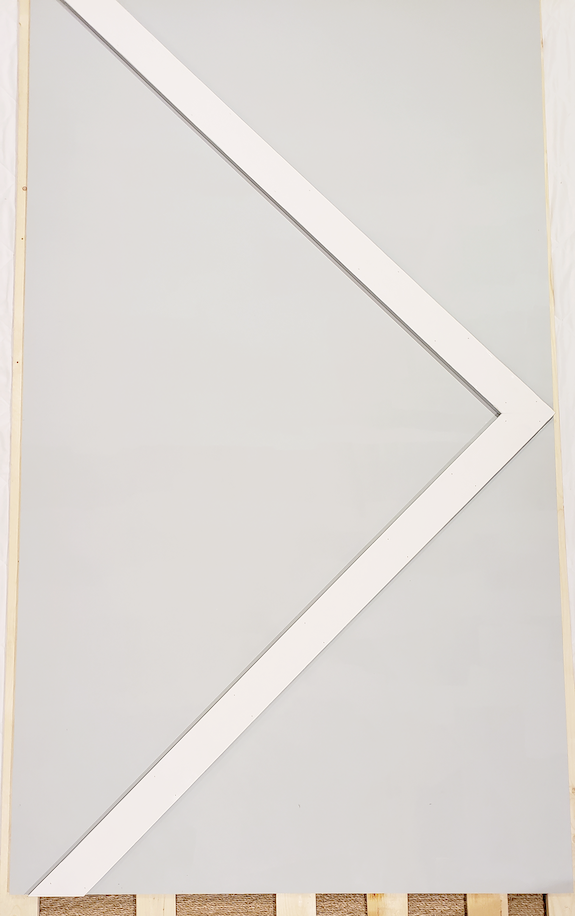 For the diagonal pattern we used 1″ x 4″ primed boards that we cut to length. What is hard to see is that we drew a couple of pattern lines lightly in pencil to be sure our first few pieces went in exactly where we wanted, as those pieces would set the stage for all of the remaining cuts.

To affix the boards to the MDF, we covered the back of each board in wood glue and used our brad nailer and 1″ brad nails.

We used a speed square along the edge to draw our cut line, everything was cut at a 45-degree angle with our miter saw. 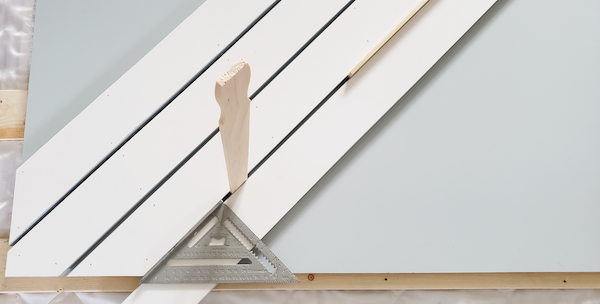 While purchasing material and paint, we noticed some extra-large paint stir sticks and thought that they would make for the perfect spacers. And they did! 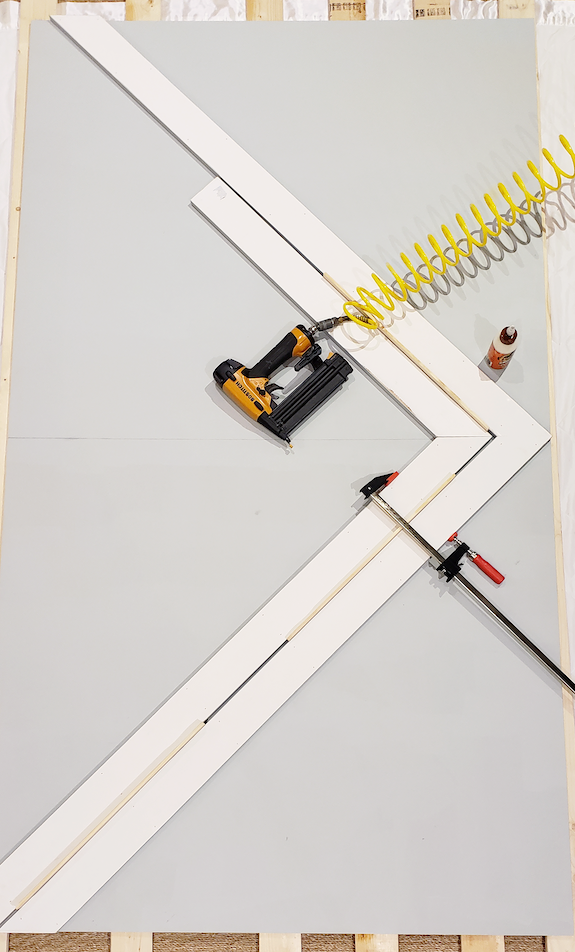 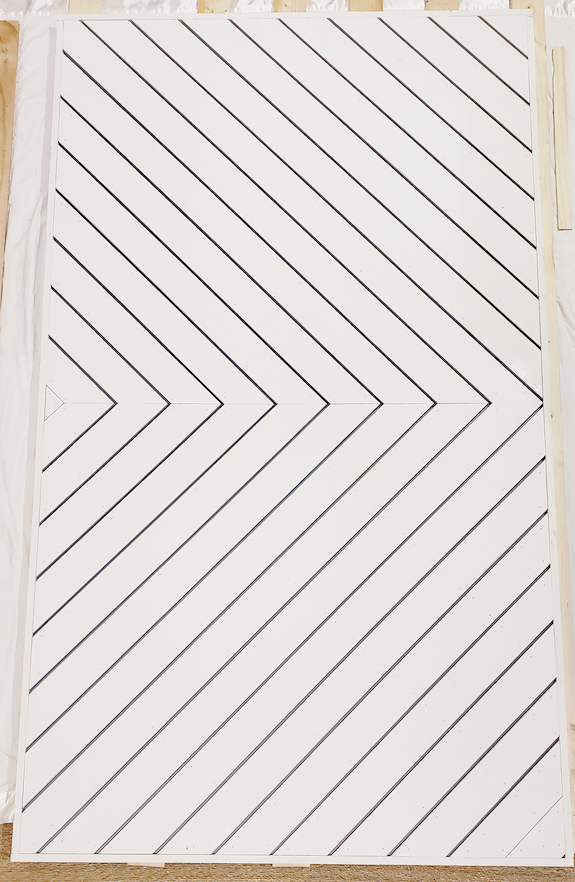 You may notice a couple of final pieces where the spacing doesn’t look right, and that is because those areas were going to be covered by the decorative trim on the face anyway, we just popped boards in for backing.

Also above you can see how we trimmed the perimeter of the door with the 1″ x 2″ boards we purchased. Bryan ended up ripping each one to be exactly flush with the depth of the mdf board plus the diagonal pieces. Again, we added those boards to get the door just wide enough to cover both the closet opening and the closet door casing. This also added a nicely finished edge on each side of the door.

To finish off the design, I found some light-weight pine lattice moulding at Home Depot. It was the perfect width to frame out the door and hit the rail wheel hardware juuuuust right. 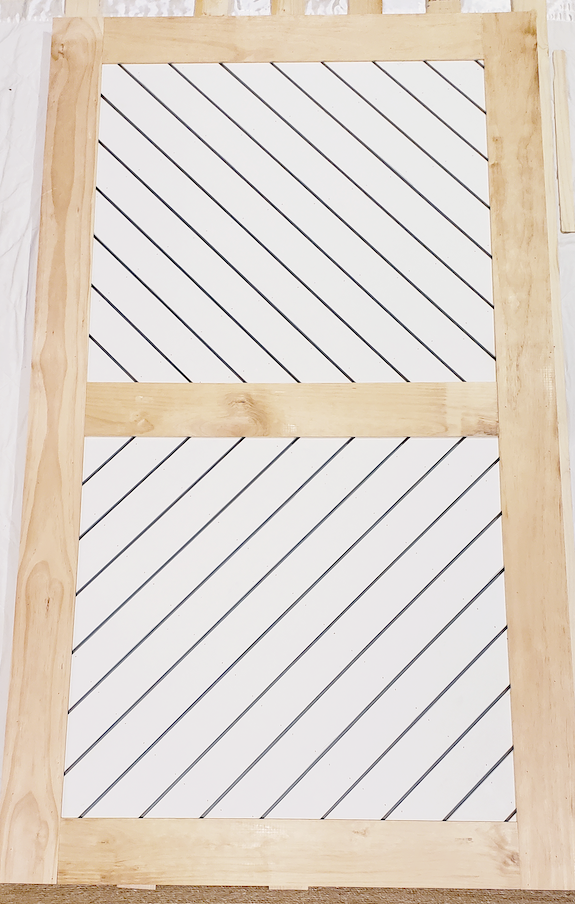 I know, I know… This is that awkward middle stage where it is hard to see just how amazing it is going to look until it is all painted in the same cohesive color. But first, I had to fill every last nail hole with putty. And then I went over the entire door a second time just to be sure there were no pits. And then a lot of sanding everything nice and smooth. 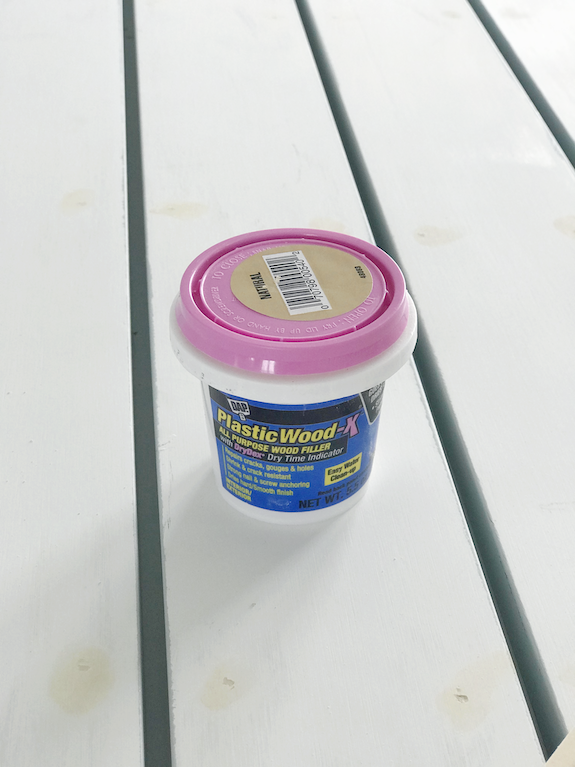 This step was worth every bit of time it took to really achieve the best finish possible. 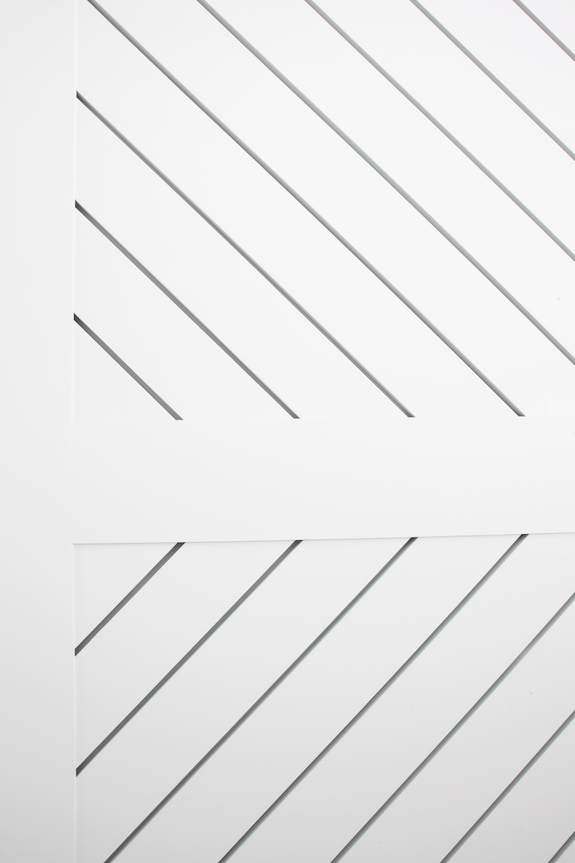 The color I went with is Benjamin Moore Wales Gray. I felt like it was just different enough from the walls (Sherwin Williams Nebulous Cloud), and complimented the ceiling (Benjamin Moore Blue Dusk). 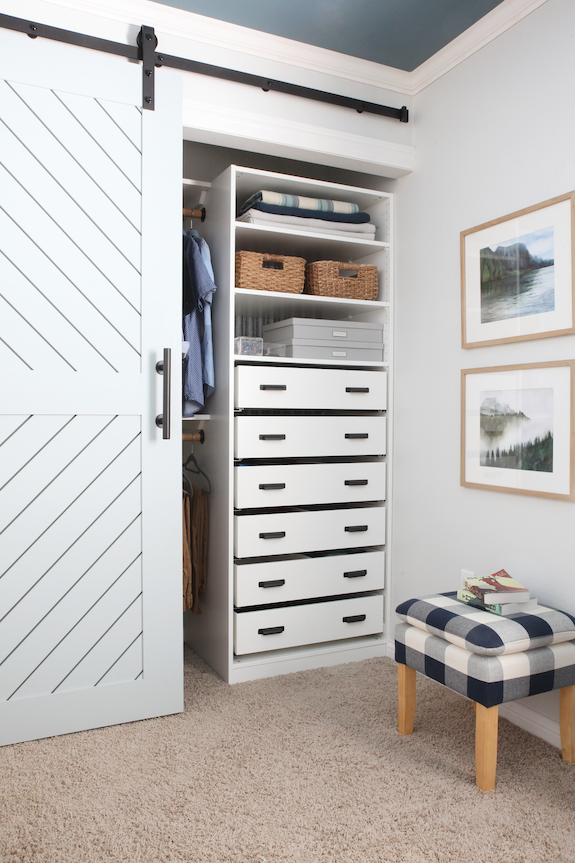 Once the door was up, I decided it wasn’t worth it to move the rail to the corner of the wall and add a ledger board behind it. The fact the rail stops an inch short isn’t all that obvious because the edge of the door goes right into the corner. Plus, the details on the door steal the show! 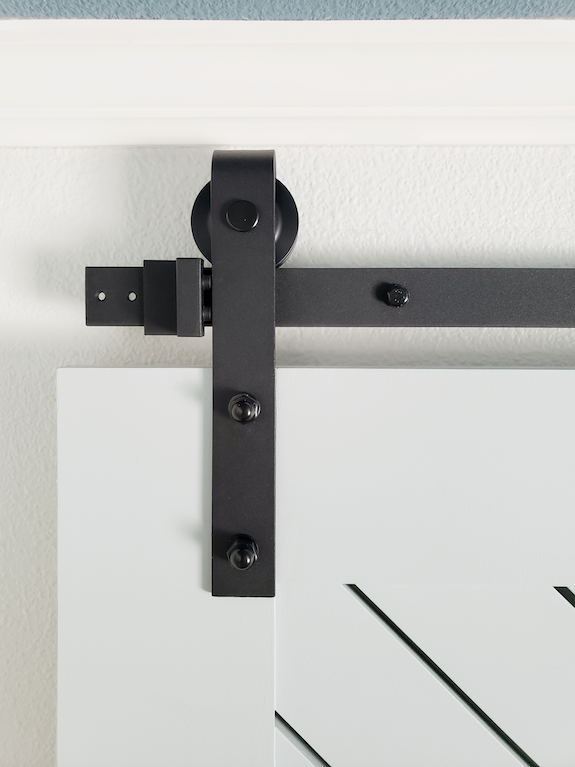 The rail is able to support up to 225 pounds, and our door came in under that so we could scratch that worry off of the list, and the stoppers on each end are completely adjustable. 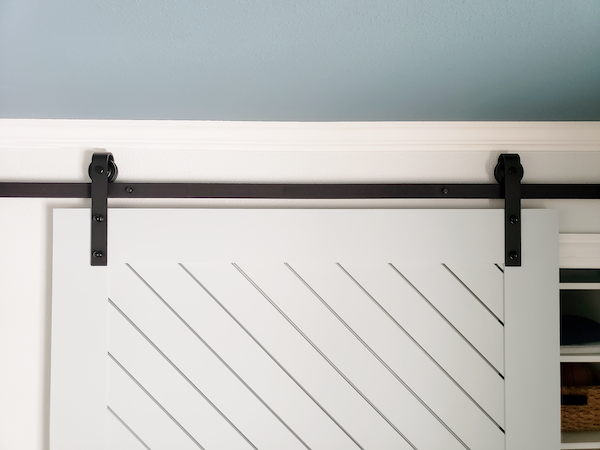 Although the door still cleared the trim without a ledger board, we ended up having to inset the bottom bolt of the door hanging hardware into the back of the door to prevent it from rubbing against the white closet door casing.

I found the handle hardware on Amazon here. I like that it is substantial and coordinates with all of the other matte black hardware throughout his room. 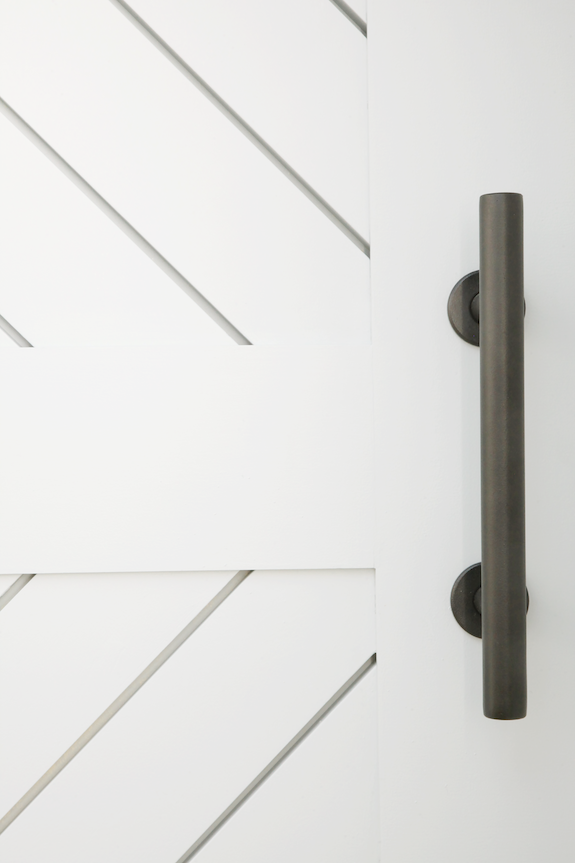 I put together a little motion shot of the new door opening and closing because we are just so excited to finally have this project checked off of our list!

As far as the organization goes, you can see that it is maintaining nicely! The only change is that all of his clothes have basically doubled in size. Oh! And we actually swapped the bottom shoe tray with a drawer we took out of our pantry cabinet (hoping to share more about that soon). We like that the drawer hides the shoes (yet they can still breathe), and that it can serve a different purpose all together down the road. You can read every last detail about his closet organization here. 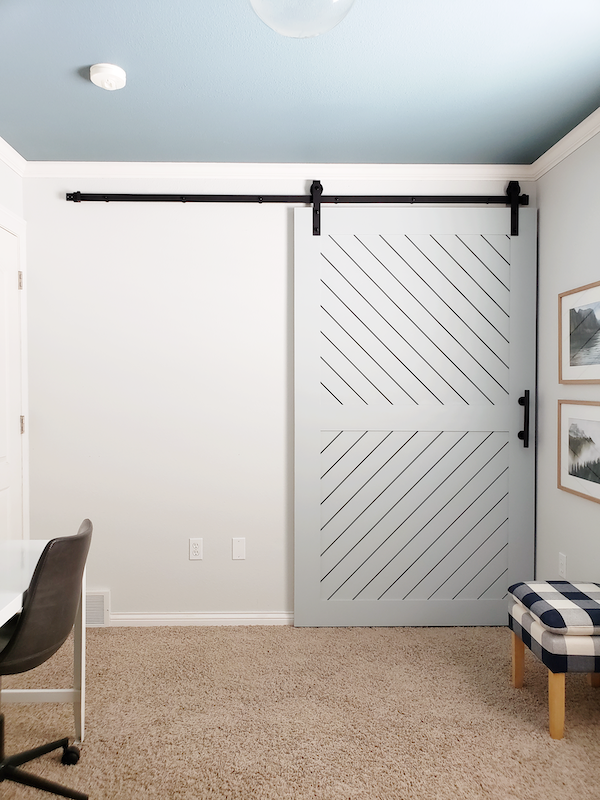 Here is a shot of the door closed. It does leave a blank space to the left and I haven’t decided if I want to do anything there yet (we could add something up to the thickness of the door trim without any issues, but are OK just leaving it for now). The color of the door works really great with everything else he has going on, and although the door is quite large, we all love the addition and interest it has added to the room. 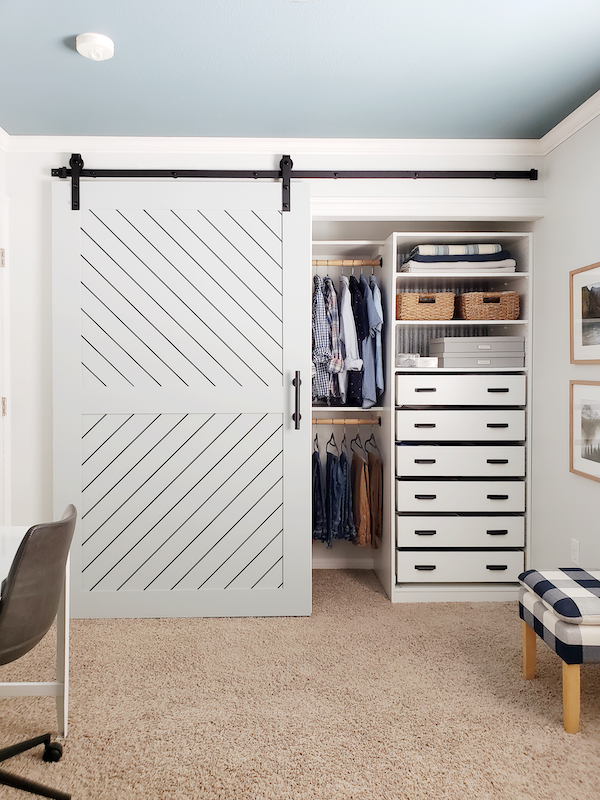 I have one more big project I want to take on in this room (a DIY headboard), and then it will be FINISHED. Oh, what a feeling!